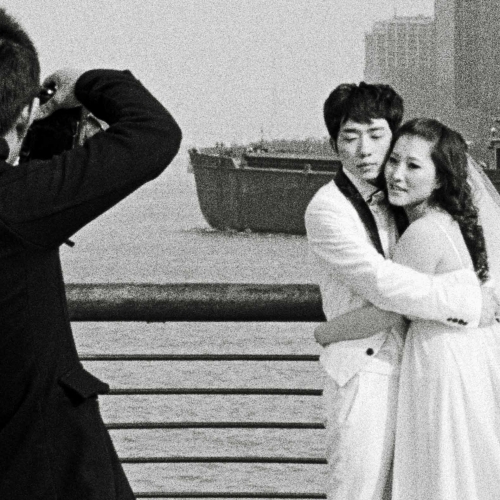 Known for her unconventional approach to portrait photography, most notably her classic trilogy THE SLEEPERS, THE TRAVELERS, and THE NARCISSISTS American photographer Elizabeth Heyert again assumes her role as observer and voyeur in her latest book, THE OUTSIDER photographed during four trips to China. Fascinated by the rituals of Chinese amateur photographers, who seem to shoot incessantly, with an intimacy with their environment that borders on stagecraft, Heyert embarked on a project to photograph the Chinese taking photographs of each other.

Few Chinese possess family photographs from the past, because so much was destroyed during the Cultural Revolution, which may explain the intensity of the photography she witnessed. She calls the project THE OUTSIDER because, as a Westerner in the East, and a stranger in a foreign culture searching for authenticity, she allowed herself to be a spectator to the photographer/ subject relationship. These are portraits of the Chinese, by the Chinese, observed by Heyert, an eyewitness to the birth of a new collective visual memory.

Purchase Book
Back To Top